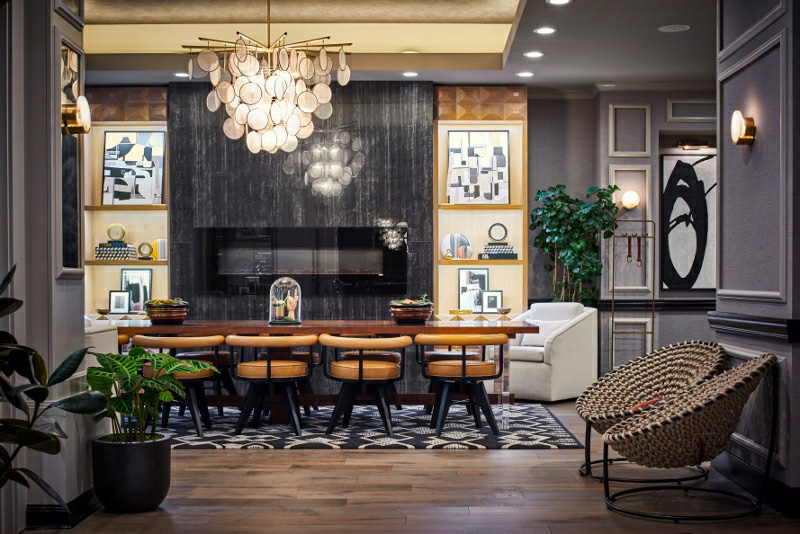 Claridge House Chicago has cut its ribbon to celebrate the reimagined interiors and newly launched brand.

The recent renovation of Claridge House Chicago, led by hospitality design and development firm The Gettys Group, is the latest in a series of boutique properties the firm has reimagined as residentially inspired “homes away from home”…

The Gettys Group has led the transformation of the 1920s hotel to unveil the 165-key Claridge House Chicago. The newly opened property features a design plan that is intimate, welcoming and in keeping with the neighborhood’s tony environs, ultimately evoking a contemporary Gold 1/5 Coast Chicago residence.

Oxford Capital Group enlisted The Gettys Group’s interior design team to lead the redesign of the property, which opened its doors in May 2018. The hotel’s prime Gold Coast location at 1244 N. Dearborn Parkway serves upscale leisure travelers, those visiting the city for business and locals seeking an elegant in-town escape. “Claridge House truly reflects the inviting atmosphere of the Gold Coast neighborhood,” says John W. Rutledge, founder, president, and chief executive officer of Oxford Hotels & Resorts, LLC and its parent company, Oxford Capital Group, LLC. “We wanted to create a place where both locals and those new to Chicago would be welcome, in one of the city’s most historic areas.”

The 165 guestrooms, each uniquely inspired by a pied-à-terre theme, were curated to offer a sophisticated city apartment feel

The property first opened in 1923 as the Claridge Hotel. It was renamed in 2005 as Hotel Indigo until this past May when it reopened as the Claridge House Chicago, paying homage to its historic past. Originally designed by Chicago architect Walter Ahlschlager, the initials “CH” and the Claridge name remain inscribed on the exterior of the 12-story building.

The Gettys Group created a concept that was based on the property coming full circle and returning to its original name.

“Our interior design team was charged with transforming the hotel’s look and feel into an intimate and curated residential aesthetic in the Gold Coast neighborhood. Ideally situated within walking distance from some of the city’s best shopping and dining, Claridge House delivers a sophistication that is as inviting as it is refined,” said Ben Nicholas, principal, The Gettys Group. 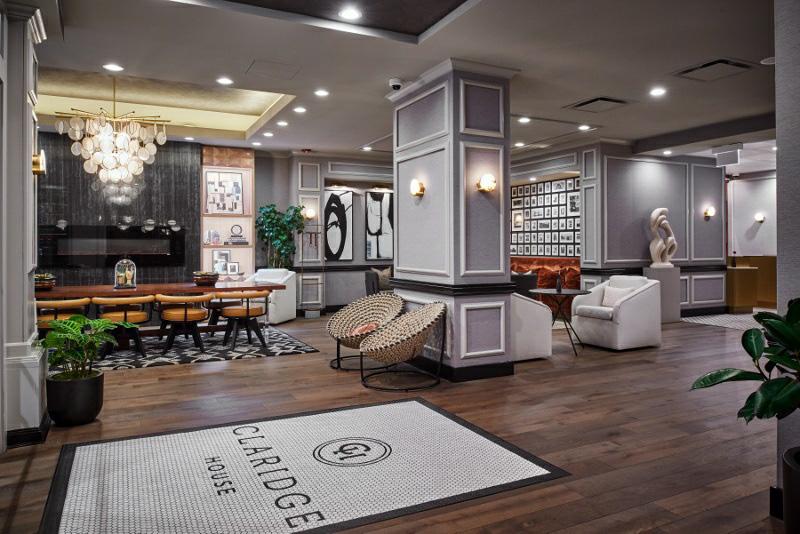 The lobby features a custom chandelier comprised of silk-wrapped rings, which are a nod to the “coming full circle” inspiration. Custom millwork anchors the lobby with an elevated linear fireplace wrapped in marble and flanked in blonde oak with exquisite definition.

The 165 guest rooms, each uniquely inspired by a pied-à-terre theme, were curated to offer a sophisticated city apartment feel. Images of London were hung proudly in each room, reminding guests of the origins of the name Claridge.

“We crafted Claridge House as a relaxed, yet refined space based on the property’s tagline, ‘Our House, You’re Home.’ It was important to our team that the design felt like an extension of the Gold Coast neighborhood,” said Ali Bacon, senior project designer, The Gettys Group. “The public areas exude a residential quality that encourages guests to congregate and relax, while the guest rooms provide the experience of a bedroom in a neighboring brownstone.”

Reinforcing the hotel’s residential atmosphere, The Gettys Group’s interior design team installed accents and personal touches to the public areas with collected art and artifacts to emulate a living room at home. An art installation features travel photos from trips taken around the world that were gathered from hotel team members and the project team for the opening.

A ribbon-cutting ceremony was held on Thursday, July 26 to celebrate the reimagined space and newly launched brand.

This article was originally featured on hoteldesigns.net/industry-news/chicagos-hotel-indigo-transformed-into-claridge-house-chicago.